D.R. Vickery and Frank Sasso met through a mutual friend in 2014. When they met up, it was clear that they were supposed to create something together.

​"We actually met in a Starbucks", says Sasso, "He (D.R.) told me about some product ideas he had of these cute, little furry things to hold your iPod and keys and stuff, and in addition to that, he wanted to make them into a cartoon series. THAT'S what got my attention. I come from a background of animation. When he showed me the sketches he put together I was instantly intrigued and started thinking about how we can develop these characters further and here we are." 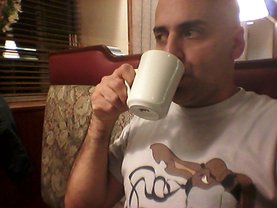 Is that a Birch t-shirt?!?!
After hundreds of illustrations, designs, and tweaks, the characters and habitat finally came together. "One of the most profound moments," says Vickery, "was sitting in a diner in New Jersey from 6pm to Midnight writing the pilot episode. We drank over 20 cups of coffee that night. After the diner closed, we went back to Frank's house and sat at his kitchen table for another 4 hours and finished the first episode. It was crazy. Frank was talking, reciting, and acting out the story and I was typing it out furiously on my laptop. We were exhausted but we did it!" 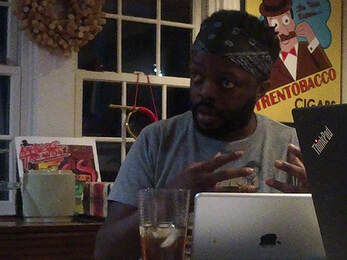 Will explaining the importance of character arcs.
Things really started to take shape when Will "Deshair" Foskey joined the team. Again, sitting in Frank's kitchen in New Jersey, Will told D.R. and Frank to draw a horizontal  line on a piece of paper. That was the beginning of what was to be the Legends of Valdoria timeline which would go onto serve as an invaluable reference for the entire 6 season storyline.

​Vickery formed G Force Creative, LLC as a result of creating the Legends of Valdoria.  In addition to Legends Of Valdoria (LOV), G Force Creative is currently planning other great animated & entertainment projects.